According to comments over at Miss Nymphe, plenty of people received much the same snail-mail over the last few days from the largest health insurance company Vzajemna. The contents of the envelope suggest that there indeed is such a thing as free lunch – although Fras seems to dispute that…

Well, he’s right, of course. There is not such thing as a free lunch. 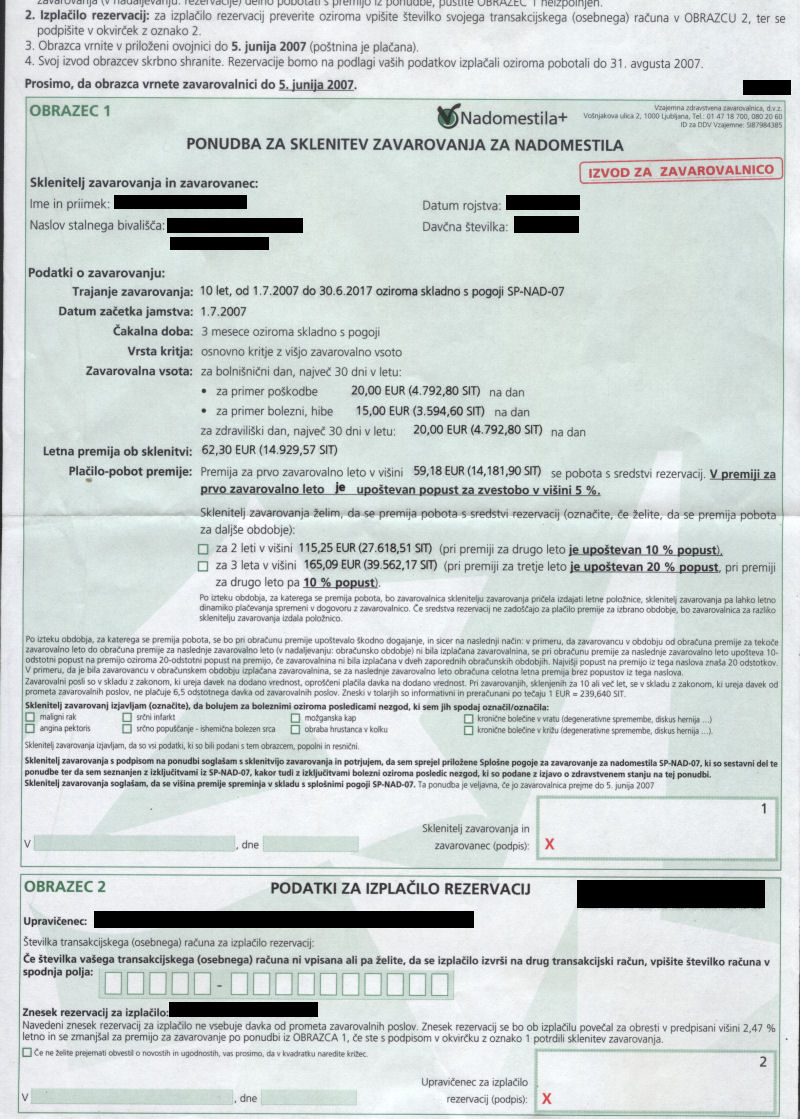 
For those of you who are either not in the know or are just too lazy to click on image, a brief explanation. The document consists of two part. The upper (much larger) part is an offer for an insurance plan for a period of 10 years. The plan in itself is pure bullshit, only securing you a meagre amount (EUR 15-20) of cash daily in case you get injured (and that does not mean comming down with a flu), and even that only for a period of 30 days.

The catch – as always – is in the small print. The company claims to cover the premium with monies from your “elderly reservations” (more on that shortly). But a premium of EUR 62 per annum (for a period of 10 years) totals some 300 percent more than my “elderly reservation” (in a minute, what’s the hurry?!?). And the small print states that “in case the reservations do not cover the premiums for the selected period, the client will be billed the remaining amount”


The second, much smaller part of the document is about Vzajemna returning your “elderly reservations”, which is basically a small chunk of cash that was put aside every month into a fund which was supposedly intended to cover the rising costs of health of the elderly people, but also making you eligible for the same level of insurance as you grow old. These “reservations” were hugely inflated and allowed insurance companies to spend them non-transparently and were thus abolished by law in early 2006, whereas the companies were instructed to return the monies to clients forthwith.


Someone at Vzajemna should be shot and then severely interrogated.


So – how to get your money from these people? Just fill in second form and leave the first one blank – better yet, put a large red X over it.

Aha, but this proves that a free lunch does exist, I hear you scream… Well, it doesn’t. This money doesn’t come out of the blue, but it was actually skimmed of your premiums, invested, laundered and is now grudgingly given back to you… Hell, it’s not even your money! It’s someone else’s money given to you as a compensation for the fact that the fat insurance companies rolled in your cash and made paper aeroplanes out of it.